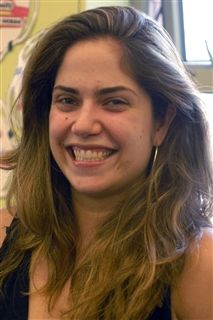 5/9/2017
Talía González, a Spanish teacher at The School at Columbia University, has been selected from a national applicant pool as a National Endowment for the Humanities (NEH) Summer Scholar to attend one of 23 seminars and institutes supported by the NEH.
The NEH is a federal agency that, each summer, supports these enrichment opportunities at colleges, universities, and cultural institutions so teachers can study with experts in humanities disciplines.

Ms. González will participate in “Tales from the Chihuahuan Desert: Borderlands Narratives about Identity and Binationalism," a two-week Summer Institute held at The University of Texas at El Paso and directed by Drs. Ignacio Martínez (Department of History) and R. Joseph Rodríguez (Department of English). The 25 teachers selected to participate in the program each receive a stipend to cover travel, study, and living expenses.
Talía González currently teaches middle-school Spanish at The School at Columbia, although she has taught every grade between Kindergarten and eighth grade in her career. She has led workshops on language teaching, social justice education, and curriculum development at national and local conferences. She has published in the National Network for Early Language Learning and is a part-time graduate student. Ms. González is an avid Flamenco dancer, reader, cook and knitter—passions she integrates into her teaching whenever possible. She is looking forward to incorporating themes from this Institute into her curriculum, which focuses on the experiences of Latinos in the U.S. @taliagonzalez2
Topics for the 23 NEH seminars and institutes offered for teachers this summer include American Women at War; America’s Reconstruction: The Untold Story; Existentialism; Foreign Exchanges: The U.S. and the Wider World in the Twentieth Century; From Harlem to Hip-hop: African-American History, Literature, and Song; From Mesa Verde to Santa Fe: Pueblo Identity in the Southwest; The Immigrant Experience in California through Literature and Theater; Johann Sebastian Bach and the Music of the Reformation Churches; Muslim American Identities, Past and Present; Philosophers of Education: Major Thinkers from the Enlightenment to the Present; Political and Constitutional Theory for Citizens; The Political Theory of Hannah Arendt: A Public Intellectual in the Public Square; Punishment, Politics, and Culture; Re-enchanting Nature: Humanities Perspectives; Religious Worlds of New York: Teaching the Everyday Life of American Religious Diversity; Rethinking the Gilded Age and Progressivisms:
Race, Capitalism, and Democracy, 1877-1920; Scholarship and Performance: Teaching Shakespeare’s Plays; Slavery in the Colonial North; Tales from the Chihuahuan Desert: Borderlands Narratives about Identity and Binationalism; Teaching Native American History; Teaching the “Long Hot Summer” of 1967 and Beyond; Voices from the Misty Mountains; and What Did Independence Mean For Women, 1776-1876?.
The approximately 500 NEH Summer Scholars who participate in these programs will teach almost 64,000 American students in the upcoming 2017-18 academic year.
Back

The School at Columbia University